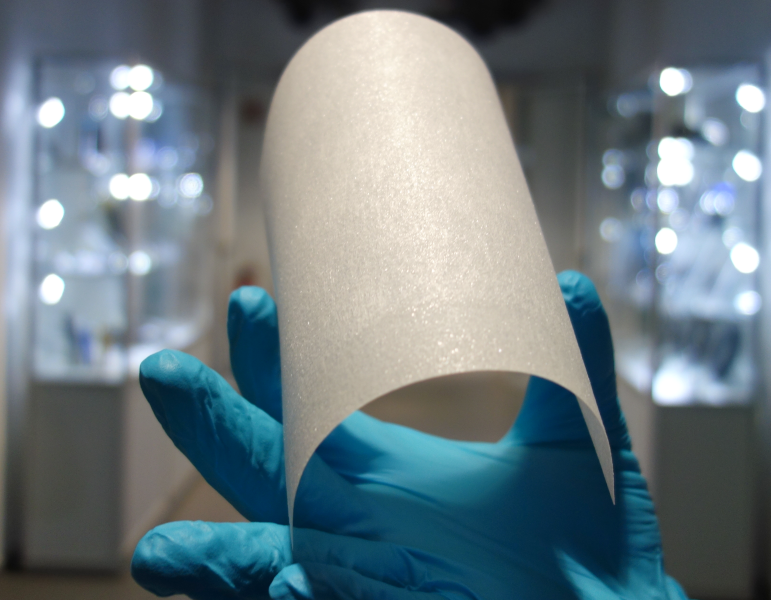 Lithium-ion batteries (LIB) are used in almost all mobile devices and increasingly in electric vehicles. The cells must not only be powerful and have a long service life, but must be safe in extreme situations. In the GlasSeLIB project, a crucial component regarding safety is to be further developed: The separator.

In order to achieve even longer usage times for portable end devices or expanded range for electric vehicles, battery manufacturers are forced to use more active material in the electrodes, and at the same time less chemical-passive elements such as current collectors or separators.

In particular, separators ensure physical separation of the electrodes and thus prevent short circuits. Today, microporous polymer films are normally used as separators, though having limited temperature stability and comparatively low ionic conductivity in the electrolyte. The development partners of the GlasSeLIB alliance have set themselves the goal to develop a glass-fiber based separator that is more temperature-stable than common separators, and is chemically active due to its chemical composition, by which cell aging is significantly slowed down. However, the challenge in production is to reduce those filigree glass-fibre based compounds to less than 20 µm thickness, which is the target for application in modern cells.

New glass compositions and innovative manufacturing processes are the development goals of the University of Bayreuth. The semi-finished glasses are processed and assembled to glass separators together with our industrial partners, Füller Glastechnologie and Vitrulan. At the Bavarian Center for Battery Technology at the University of Bayreuth, these separators are then tested under laboratory conditions before they are tested by the industry partner VARTA with respect to commercial manufacture and later use in commercial lithium-ion batteries.

Project description at the Bavarian Research Foundation (in German)