Lithium-ion batteries are the most important storage medium for electrical energy today. To meet consumer demands, such as longer standby times for portable devices or longer ranges for electric vehicles, battery cell manufacturers must increase the proportion of electrochemically active battery components such as electrode active materials and at the same time reduce the proportion of passive components such as current conductors or separators. 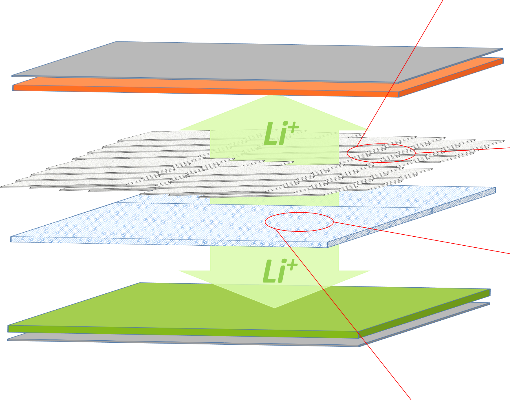 Separators are passive battery elements that physically separate the battery electrodes and thus prevent a short circuit.
Commonly, porous polymer films are used as separators, but they have only limited temperature stability and carry a high risk potential with the continuously required performance increases.
Reports of catastrophic failure of lithium-ion batteries, which in some cases led to fire or even explosion, were the initial impetus for the development of smooth thin-film separators for lithium-ion batteries. These are not only more temperature-stable than previously used materials, but also have a high electrochemical activity due to their special glass composition, which improves the performance of the cells.
The Keylab Glass Technology has both the capability to produce the separator flakes in kg scale and to manufacture test cells. The performance and stability of the glass separators in the test cells was demonstrated in extensive electrochemical test cycles. The low flammability was proven by puncture tests and other methods.